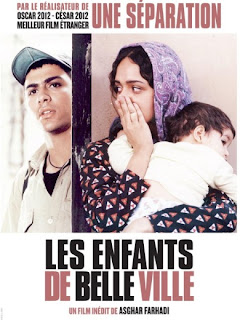 Akbar has just turned eighteen. He has been held in a rehabilitation centre for committing murder at the age of sixteen when he was condemned to death. Legally speaking, he had to reach the age of eighteen so that the conviction could be carried out. Now, Akbar is transferred to prison to await the day of his execution. A'la, a friend of Akbar, who himself has undergone imprisonment for burglary, soon after his release tries desperately to gain the consent of Akbar's plaintiff so as to stop the execution.

Email ThisBlogThis!Share to TwitterShare to FacebookShare to Pinterest
Libellés : Movies

Mounir Nassor
I am originally from India (Gujarat and Kutch) but I never lived in India though I visited it several times. I mainly grew up in Madagascar and France, I studied in Madagascar, Reunion Island, the United States and France. I am currently teaching English at an engineering school in biotechnologies and at La Sorbonne in Paris. I hold a B.A. (Licence) in History and a post-graduate degree (DEA) in English and English World Studies from La Sorbonne University (Paris IV). I also hold a Master's degree (Maîtrise) in Hindi and South Asian Studies from INALCO-Paris. This blog, "My Indias", is mostly about anything related to me and to my relationships with the whole of South Asia and it is not restricted to the present-day state of India. "My Indias" is more emcompassing and comprises Iran, Afghanistan, Bangladesh, Pakistan, Nepal, Sri Lanka, Bhutan, The Maldives, Mauritius, etc. AND, of course, India! Whenever I use the word "India" or "Indian" in this blog, it actually refers to the largest part of what is usually referred to as "South Asia". For many reasons, I cannot live in India and, as a result, I miss "my Indias" a lot. To contact me: mounirnassor@yahoo.co.in