Coup de coeur : My brother...Nikhil by Onir with Sanjay Suri and Juhi Chawla 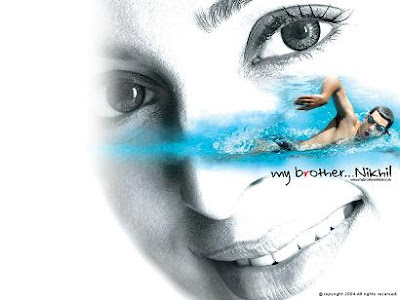 This film is set in Goa, a small costal state in India in between 1989 and 1994. Nikhil Kapoor is the state all round swimming champion. His father Navin Kapoor has raised his son to be a sports man... a dream that he never achieved for himself. His elder sister Anamika teaches in a primary school and loves him dearly. His mother Anita Rosario Kapoor adores him and from her he inherited his artistic side to his personality.

One fine day he is arrested. The reason being…. that he is HIV positive. He is kept in forced isolation by law. The Goa public health act allowed the government to isolate HIV positive people. His Parents desert him and his friends move away. The only two people who stand by him are his sister Anamika and boyfriend Nigel.

This film would probably be the first main stream Indian film where the main protagonist is Homosexual. This film deals with the trauma of this man and his fight for dignity; A film about how a closely knit family falls apart when faced with a crisis; about a sisters unconditional love for her brother; about a love that withstood social disapproval; a film about a man's desire to achieve something in life and finally it’s a film about acceptance.

This summary is taken from the official site of the movie My Brother Nikhil : 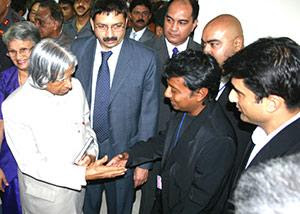 The current President of India, APJ Abdul Kalam, being given the DVD of the movie My Brother Nikhil

My brother…NIKHIL is one of the rare films which is being used by more than one way to combat HIV / Aids in our country. The film has been screened many times for charitable causes and most twice by the Army (Assam Rifles) in Shillong once in April 2005 and now at the Conlave HIV / Aids : A Uniformed Intervention.

His Excellency Hon’ble Dr A P J ABDUL KALAM inaugurated the programme and a dvd of the film was gifted to The President.

The film is being used to spread awareness and talk about stigmatization related to HIV/Aids.

The spirit of Nikhil lives on.
(commentary and picture taken from the official site of the movie http://www.mybrothernikhil.com)
Publié par Mounir Nassor

Email ThisBlogThis!Share to TwitterShare to FacebookShare to Pinterest
Libellés : Movies

This is really interesting to read...thanks for haring the review...and it's truly a great film..and hey there's also Holi coming up real soon..so drop by my blog on Holi Fun and enjoy all the fun and colors it's filled up with!!!

Mounir Nassor
I am originally from India (Gujarat and Kutch) but I never lived in India though I visited it several times. I mainly grew up in Madagascar and France, I studied in Madagascar, Reunion Island, the United States and France. I am currently teaching English at an engineering school in biotechnologies and at La Sorbonne in Paris. I hold a B.A. (Licence) in History and a post-graduate degree (DEA) in English and English World Studies from La Sorbonne University (Paris IV). I also hold a Master's degree (Maîtrise) in Hindi and South Asian Studies from INALCO-Paris. This blog, "My Indias", is mostly about anything related to me and to my relationships with the whole of South Asia and it is not restricted to the present-day state of India. "My Indias" is more emcompassing and comprises Iran, Afghanistan, Bangladesh, Pakistan, Nepal, Sri Lanka, Bhutan, The Maldives, Mauritius, etc. AND, of course, India! Whenever I use the word "India" or "Indian" in this blog, it actually refers to the largest part of what is usually referred to as "South Asia". For many reasons, I cannot live in India and, as a result, I miss "my Indias" a lot. To contact me: mounirnassor@yahoo.co.in